There are many legacies from The Great War For Civilisation (World War 1) and "Trench Art" memorabilia is considered an important legacy.......

In the French/Belgium 1914 Winter an activity emerged in townships and the second line, known as "Trench Craftsmanship". Battlefield materials were utilised to create souvenir memory items.

Demand for war souvenirs was fuelled following a competition in the French Newspaper, LE PAYS DE FRANCE,  in 1915, when selected "Trench Artists" (Lartisanat de tranchées) were awarded prizes for their works ! 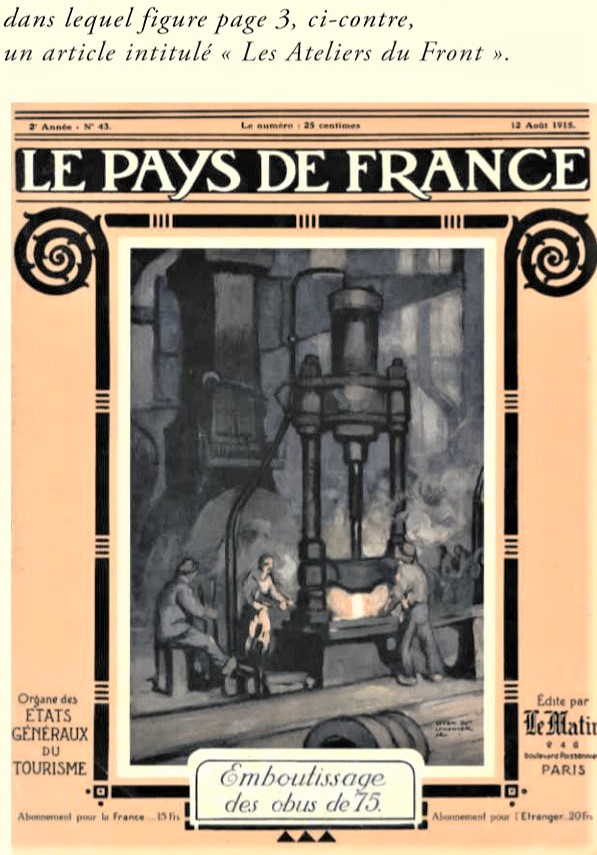 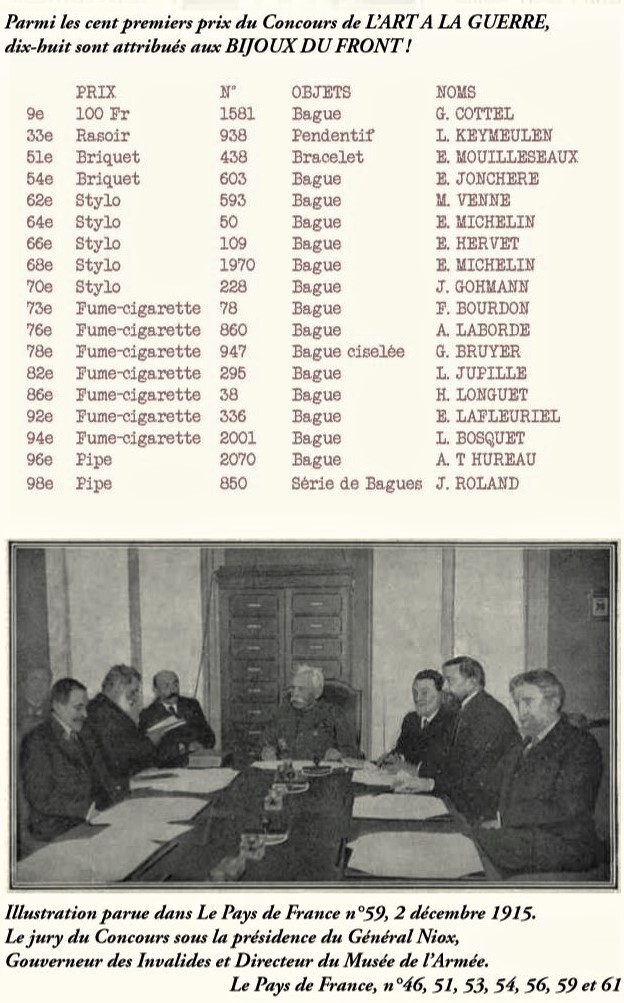 The craft comprises any decorative item made by soldiers, sailors, airforce personnel, prisoners of war, civilians, Chinese Labour Corps., auxiliary services, where the manufacture is directly linked to the Great War or its consequences, offering an insight to the maker's wartime feelings and emotions and their surroundings utilising materials they had available to them.


Small objects were created by men in the front and second lines, which would have served the dual purpose of providing a souvenir whilst whiling away periods of boredom. Larger and more detailed pieces were made in workshops by troops behind the lines - they had materials, machinery, skills to engineer memory objects for soldiers heading home. In France and Belgium, work to make memory souvenirs was given to civilians displaced by the war.

Objects were also made at home during the war by those awaiting call-up; also by wounded and convalescing men, for whom handicrafts involving wood, metal, paper, embroidery etc. formed part of their rehabilitation.

In France,  the public were eager to show their support and affection for the members of families serving in the war, and purchased items sent home, with the monies aiding the war effort or supporting convalescents.

The extracts below show illustrate the raising of monies for good causes
(taken from the catalogue La Gerbe d'Or 1917 )..... 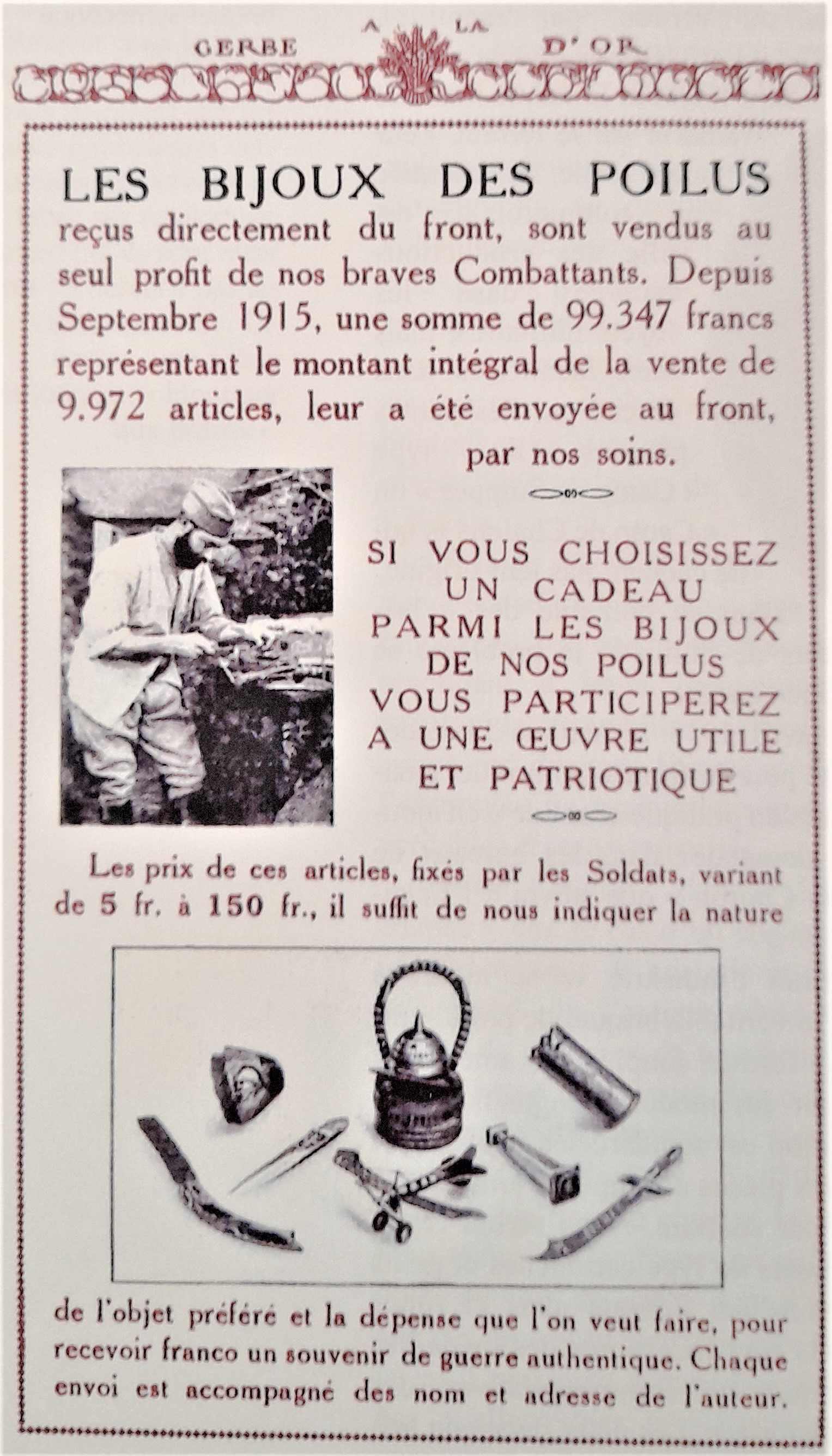 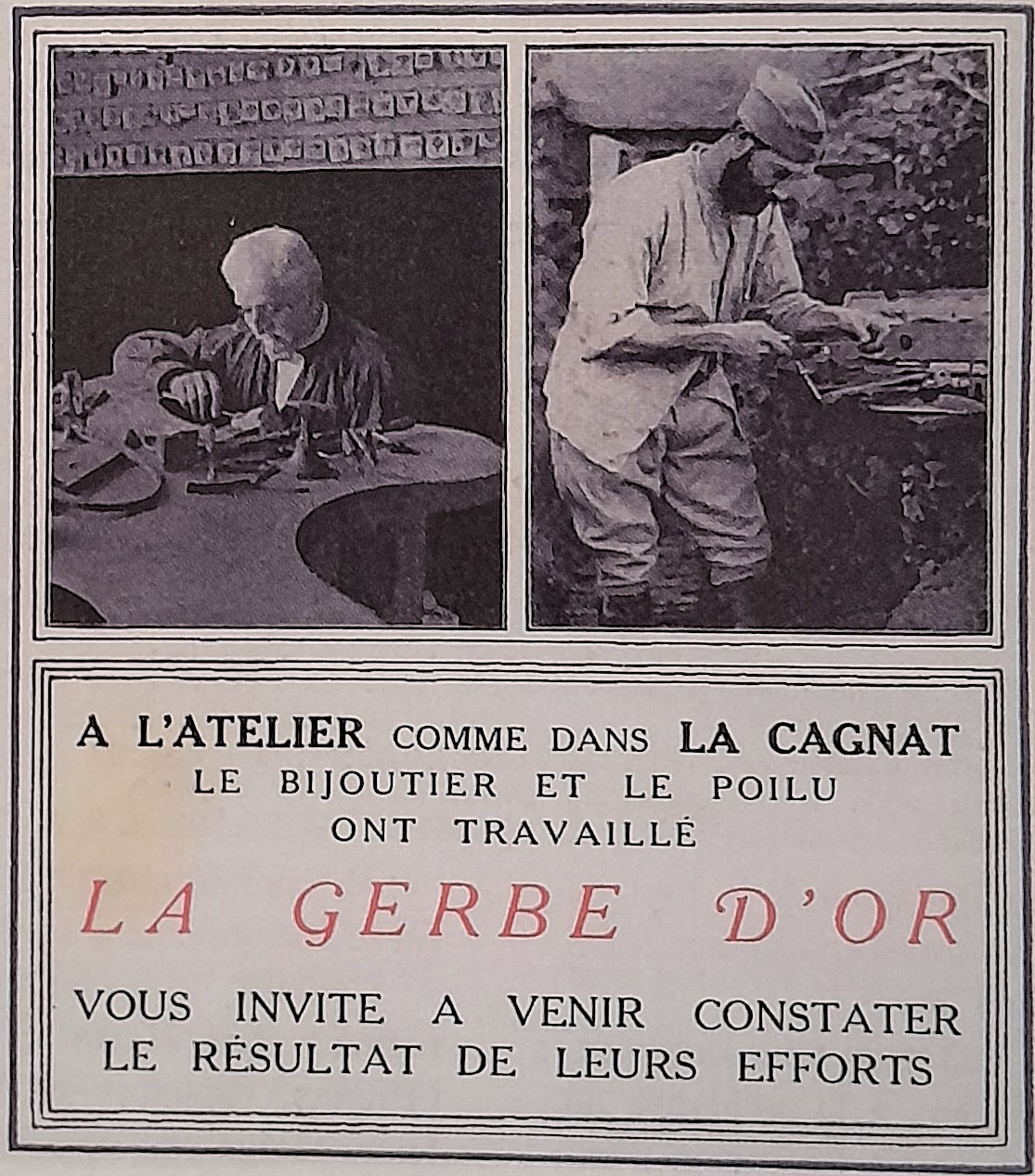 Souvenirs were frequently made to order, with personalised designs, names, messages being added for the new owner..paid from a soldier's small pay. 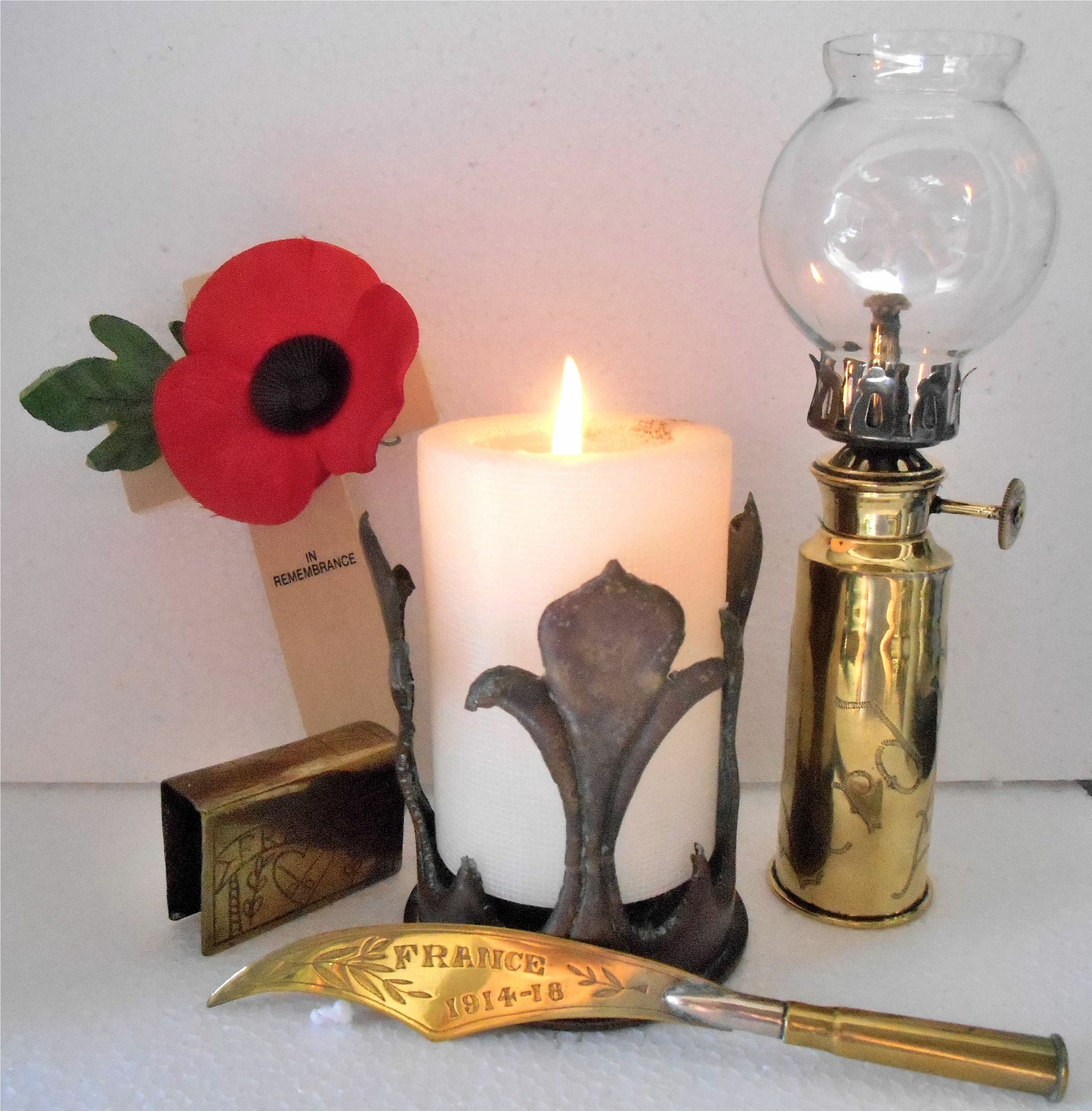 An example of this is was Orley E. Brown, Iowa City, USA, who set up business in 1920 as an "Artillery Shell Decorator" - he sent the following brochure to the Field Secretary of the Methodist Deaconess Hospital in Rapid City, South Dakota, asking him if he would inform wounded veterans that they could have their shell casings decorated to order ! 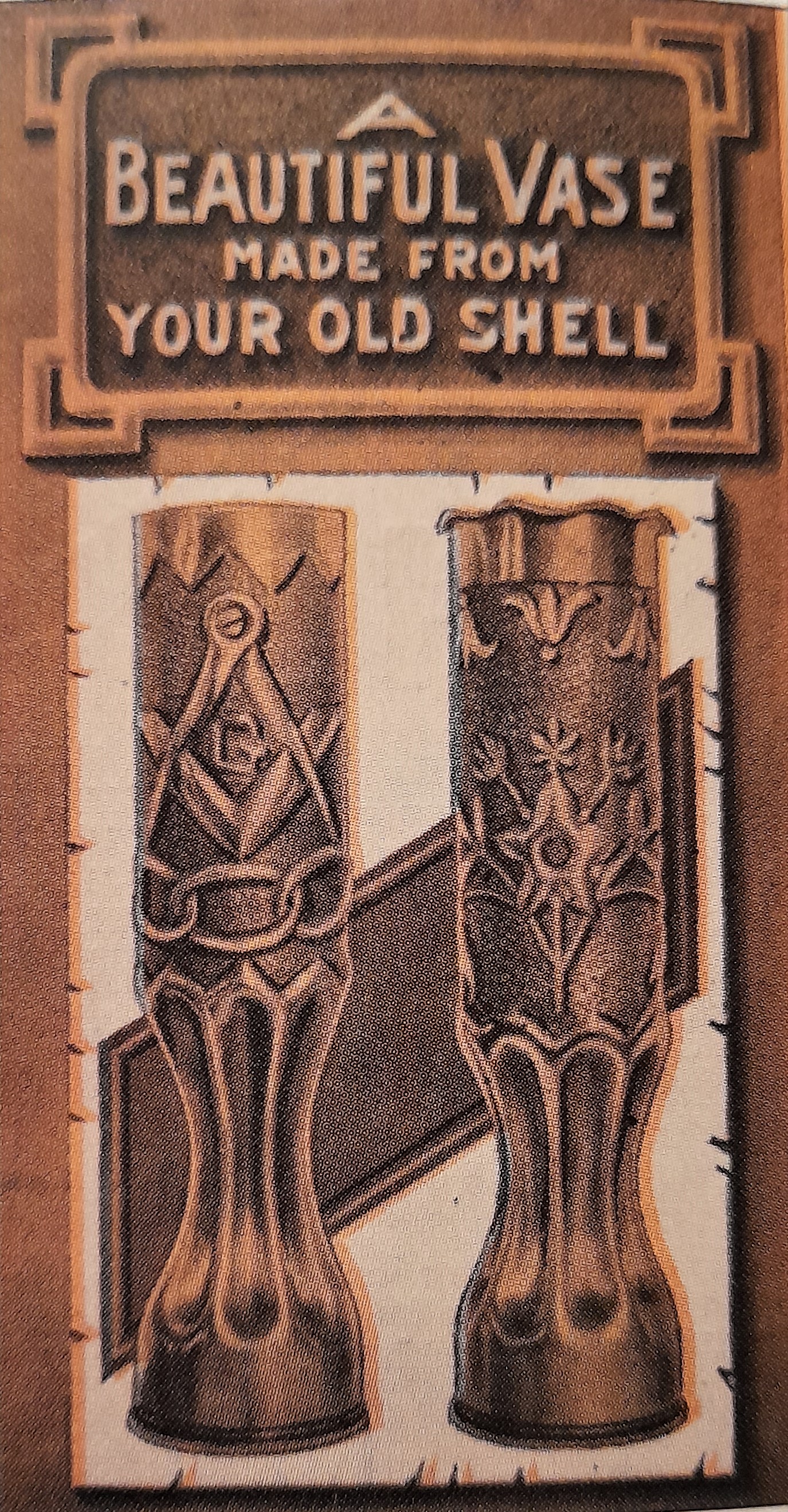 "A huge amount of First World War trench art survives to this day and, since 1918, has been augmented by pseudo-trench art produced to cater to the battlefield tourist market on the former Western Front. In recent times, it has become accepted that this manifestation of First World War material culture is far from trivial or ephemeral, but that it offers crucial insights into peoples experience of, and engagement with, the war."
(courtesy: Paul Cornish, Imperial War Museums) 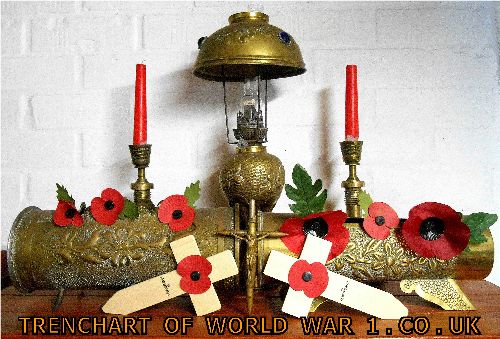